PACE will offer housing assistance for homeless veterans and their families with case management and clinical service assessments, while recognizing those services that are provided by the Department of Veterans Affairs (VA) at its medical centers and in the community.

PACE will assists homeless veterans and their families by affording decent, safe, and sanitary housing. Beneficiaries are selected based on certain requirements including health care eligibility, homelessness status, and income. According to the VA, since 2008, beneficiaries are no longer required to be chronically mentally ill or have chronic substance abuse disorders. However, chronically homeless veterans are a target population for PACE.

Per The National Coalition for Homeless Veterans     (www.nchv.org)

In January 2011 four states – California, Florida, New York, and Texas – accounted for 52% of all homeless veterans across the country, though only representing 28% of the total veteran population.
In 2010, 68% of homeless veterans accessed residential services in principal cities. This concentration of veteran homelessness in principal cities is more notable considering that the general adult and total veteran populations have a very different geographic distribution; the majority of U.S. adults (63%) and the majority of veterans (69%) are located in suburban and rural areas. 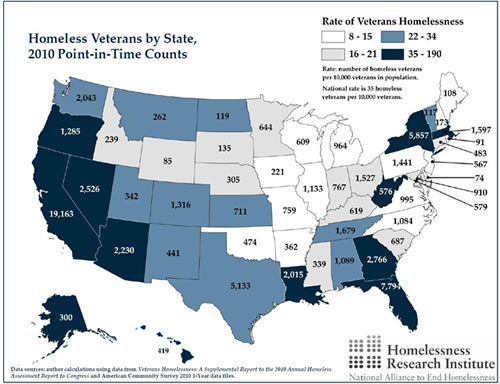